For nearly 50 years, Scovill’s Landscape has left lasting impressions on many surrounding properties throughout Central CT.  Our, now, 2nd generation family business is powered by a team of remarkably skilled workers with exceptional talent put forth to execute every element of each project we design.  Specializing in design and installation, we have expanded our abilities from landscape and garden center to extraordinary, custom outdoor living spaces.  At Scovill’s we strive to operate at the highest level of workmanship by maintaining efficiency and quality control.  With education, certified training, tools, and proper equipment, the team at Scovill’s is equipt to handle any and all projects large or small.

In 1969, Art Scovill began his career in earthworks doing tree removal part time while studying at the University of CT for his Horticulture degree, leading to 1972 when he started his own company, Scovill’s Landscape & Garden Center.  Art built this company while also working for the state of CT on soil conservation services and building wildlife ponds.  During the years of 1979-1983, Art began to expand the company in designing and building landscapes and opening a full-service garden center.  Soon after, he was joined by his wife and business partner, Sue Scovill.  After decades of success in the landscape and garden center business, their son, Tyler Scovill, was in a position to take this company to the next level.  Tyler had big plans and visions of what was next.  While still designing and building landscapes, Tyler shifted the focus to creating custom hardscapes and outdoor living spaces.  Tyler has exceeded expectations, leaps and bounds in all areas.  Following in his fathers footsteps, Tyler is joined by his girlfriend and business partner, Gillian Pitruzzello.  Together, as a team, their passion for this work speaks through each and every landscape / outdoor living space they create.  While being in a family business can be tough, it allows us to all feed off of each other to continue the success behind the name, Scovill’s. 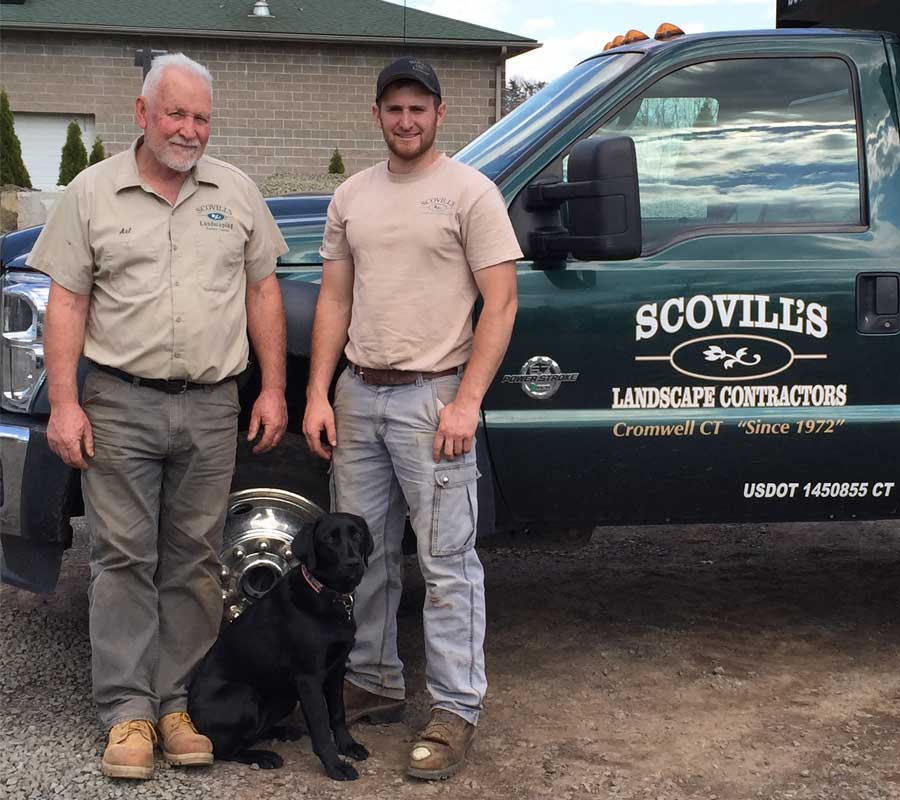 I am very fortunate to have a career that I love and a team that I truly enjoy being a part of.

My passion for creating these landscapes has evolved into so much more. I’ve grown to feel that “landscapes” is too vague of a depiction to reflect our work. It’s really an environment that we’re trying to create, to encourage you to enjoy the property you have worked so hard to earn.

Our success in delivering quality work revolves around the commitment and intense devotion of our entire team at Scovill’s. For me, it is incredibly humbling to see how much pride each crew has in the work they do. I’ve really “hit it big” with this extremely talented group of men and women.

I take my relationships with my employees, vendors, and customers very seriously. It is extremely important to me. I can’t stress enough, with my customers, how important it is when selecting a contractor that suits them best. My aim is to make clients feel confident and comfortable choosing our company to work with. In my opinion, being personable and relatable with our clientele goes a long way. I am adamant about my company delivering fast and convenient communication while educating our customers at the same time, allowing them to be absolutely sure about every decision made. I have met so many wonderful people along my journey with this company who’ve started out as customers and have turned into great friends.

I look forward to the next rewarding experience and a chance to introduce you to my talented team. My team and I attach great importance to your concepts and ideas whether it be something small or large. I guarantee you will see the “Scovill’s difference”.